The weather here was beautiful this weekend, so my wife and I made the trip up to Beloit to take in a game on Sunday.  Keeping an eye on the Snappers this season (via Seth and JeffA), it seemed like they were having a tough go of it so far, perhaps our presence could inspire a victory?

Success!  Upon returning home to see the Twins were victimized by another walk-off HR, it was obvious we had made the right decision.  Dan Osterbrock got the start for the Snappers, and promptly gave up a 2-run HR in the first.  Not an auspicious start, but Angel Morales upped the ante with a 3-run HR of his own in the bottom half of the first. 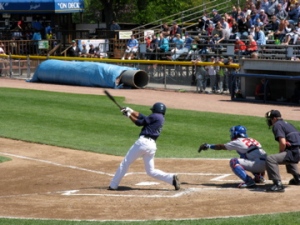 Osterbrock and Morales were the stories of this game, Osterbrock ran out of gas in the sixth, but essentially cruised through the first 5 innings.  After the fifth I commented on the efficiency of the Snappers pitcher, so if that was enough to jinx him, I apologize.

Fortunately, the Peoria starter struggled mightily, not making it out of the third inning.  By the time he left the game, only one Beloit player in the lineup had yet to reach base and the Snappers had a 7-2 lead.

The ump was calling the high strike, but come on…

James Beresford knocked out three singles (all ground balls through the infield:  to tell you the truth the Peoria shortstop had a really tough day – not sure if he was being poorly positioned by the coaches or what, but everything was just out of his reach).  I mentioned Morales, who got hits in his first three at-bats and scored 2 runs.

Steve Blevins came in to put out the fire in the sixth, and after the inherited runner scored, he got out of it to leave the Snappers ahead 7-6.  At this point I was a bit worried that I had signed up to witness another bullpen implosion, but Blevins was solid over the next two innings (no hits, one walk – the only free pass issued by Beloit pitching) and Danny Rondon pitched a 1-2-3 ninth with 2 strikeouts to earn the save. 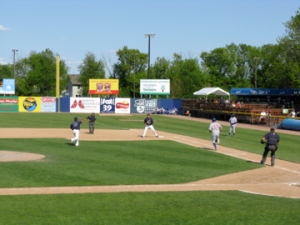 This might have been the ideal baseball game.  The Snappers jumped ahead early, and other than one half inning, never looked like they were going to give up the lead.  A nice solid win for Beloit, hopefully that starts something of a roll for them.

More pictures to come as I upload them.

2 thoughts on “What I Watched Instead of Walk-Off Weekend”